On June 23, the British electorate, once again, confounded the pundits and bookmakers by voting, 51.9 per cent against 48.1 per cent , to leave the European Union (EU).

The British had joined the EU in 1973. In a referendum in 1975, the British electorate had voted overwhelmingly to remain in the EU. In the aftermath of Brexit – or British exit from the EU – a new wave of euroscepticism has seized Europe. The leader of the French National Party, Ms Marine Le Pen, has demanded a referendum in France on its EU membership. Right-wing politicians in the Netherlands, Hungary, Italy, Denmark and Austria have expressed similar sentiments.

The occasion was an interview with German newspaper Die Zeit. When the Die Zeit journalist asked Mr Lee whether he regarded the EU as an inspiration for other regions of the world, Mr Lee replied: “I don’t see the European Union as an inspiration for the world. I see it as an enterprise that was misconceived by too fast an enlargement and likely to fail.”

Both Mr Lee and Mr Schmidt have since passed on. Their exchange was republished on The Straits Times’ website this week.

Echoing Mr Lee’s sentiments, my colleague, Mr Bilahari Kausikan, a former permanent secretary of the Foreign Affairs Ministry, has recently said in his IPS-Nathan Lectures that: “Any political project undertaken in defiance of human nature is bound to eventually fail. In this respect, the EU stands as a prime example of the futility and danger of letting mental frameworks, however appealing or noble, outrun reality.”

I hope, however, that the leaders of the EU will consider Brexit as a wake-up call to undertake bold reform and to bring it closer to the people of the Union.

Many critics of the EU have forgotten or do not know history. The nations of Europe had been at war with one another for centuries. After two devastating world wars, the leaders of post-World War II Europe decided to put an end to half a century of conflict and to plant the seeds of peace.

Six European countries, namely, France, Germany, Italy, the Netherlands, Belgium and Luxembourg, took the lead in 1952 to form the European Coal and Steel Community. In 1958, they signed the Treaty of Rome. As mutual trust and confidence grew, they advanced incrementally to a customs union, a single market and, finally, the EU.

The greatest achievement of the EU in the past 60 years is that it has kept the peace in Europe. During this long period, no two members of the EU have gone to war with each other. People forget that the most important objective of the European integration project is to institutionalise peace and to prevent war. This is why the Nobel Peace Prize was conferred on the EU in 2012.

European economic integration is also a success story. After World War II, much of Europe lay in ruins. The American- led Marshall Plan helped Europe to recover economically. However, most of the credit for the European post-war recovery must be given to Europeans themselves. The hard work, sacrifice and determination of the post-war generation of Europeans produced miraculous results. Another reason for their success was the political will to co-operate and the willingness to pool their sovereignties.

Today, in spite of the slow recovery from the global financial crisis of 2008, Europe is an oasis of prosperity. The people of Europe enjoy a very high standard of living.

The EU is the world’s largest economy and largest investor. It accounts for 28 per cent of the world’s gross domestic product (GDP) and 21 per cent of world trade. According to the World Economic Forum’s Global Competitiveness Index, some of the world’s most competitive economies are EU members.

The leaders of the EU should however regard Brexit as a wake-up call. They should be concerned that public opinion throughout Europe has turned against the EU and against the European Commission in Brussels.

What should be done? First, I think the European Commission and the European Parliament should retreat from their tendency to over-regulate and to impose unnecessary and unreasonable restrictions on the private sector and on the consumers. For example, why should they interfere in European consumers’ choices of chocolates and cheeses?

Second, the EU has failed to produce jobs for their young people. In some of the EU countries, youth unemployment is in double digits. Brussels should improve the business environment, liberalise labour markets, encourage investment and skill development and incentivise growth and job creation. The objective should be to make EU economies boom again.

Third, the leaders of the EU should ensure that the fruits of globalisation and integration are enjoyed by ordinary Europeans and not just by the talented, highly- educated urban elite. This divide was clearly seen in the fact that the electorate in London voted to remain whereas the rest of England voted to leave. 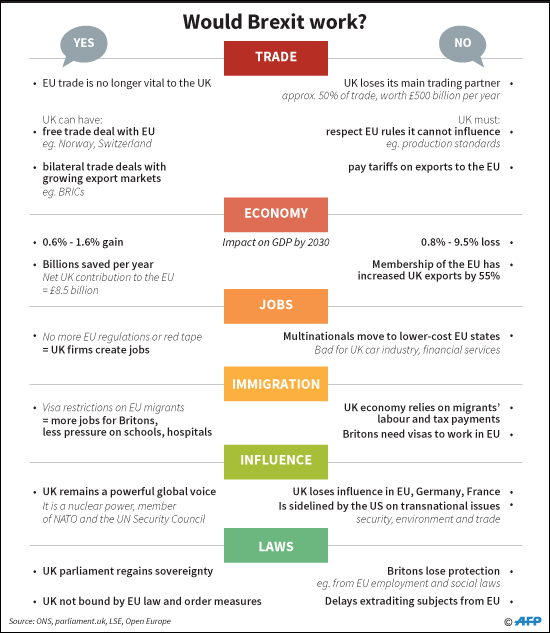 A STRONGER EU WITHOUT UK

I believe that an EU without the UK can be stronger.

Why do I hold this view?

I think that the British are not, at heart, Europeans. It is a fact that the two major political parties, Conservative and Labour, are internally divided about their place in Europe. This has always been the case. I recall that when Winston Churchill spoke about the United States of Europe, he excluded the UK from his proposal. It is better for the EU not to have a member which is ambivalent and conflicted and which wants to be half in, half out.

Let the UK seek a new future outside the EU. Let the EU of 27 renew its faith in itself, reinvigorate its economy, narrow the gap between winners and losers and reduce the bureaucracy of Brussels.

The author was the founding executive director of the Asia-Europe Foundation.
– See more at: http://news.asiaone.com/news/asian-opinions/why-i-think-eu-will-survive#sthash.OgTvVXTJ.dpuf