Belgium may have one of the most talented squads in world football, but they were frustrated by Greece on Saturday night.

The World Cup qualifier finished 1-1 and Roberto Martinez’s side needed a late goal from Romelu Lukaku to rescue a point at home. Kostas Mitroglou gave Greece the lead just after half-time in a fiery game. 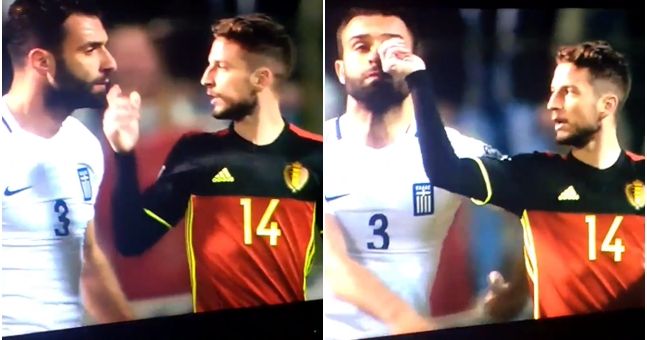 There were 34 fouls, eight yellow cards and two red cards, with Greek players Panagiotis Tachtsidis and Giorgos Tzavellas receiving their marching orders in the second half.

The strangest incident in the game came after 60 minutes, when Belgium forward Dries Mertens decided to pinch Tzavellas’ nose for some reason.

The pair exchanged words and naturally Mertens thought the best way to deal with his opponent was by scratching his nose. The Napoli player was booked for it.

It’s staggering to think that both of these incidents were given the same punishment.

Gareth Bale got a yellow card for a disgusting lunge on John O’Shea during Wales’ game against the Republic of Ireland on Friday, and Mertens the same punishment for grabbing an opponent’s nose.