The popularity of blueberries is increasing but in Belgium the area is modest compared to the demand, around 50 hectares. BelOrta has the largest share, with an area of over 30 hectares. “Yet blueberry production is on the rise,” says Miguel Demaeght of BelOrta. “This year there are more plantations coming into full production. We expect to harvest 400,000 kg of blueberries this season. We estimate a slow growth in the coming years. There are still a lot of opportunities for this product.”

He indicates that as far as blueberries are concerned they are behind compared to other European countries. In the neighbouring Netherlands the blueberry area was over 700 hectares in 2014. “It’s an interesting product, including commercially, but we won’t force growers to expand with a certain product. The only thing we can do is give information and advise. The grower is the one who makes the choice in the end.”

He continues: “As far as sales go the blueberries are often combined with raspberries and blackberries, but when it comes to expansion in areas it is often the former two that growers choose. There are several reasons for this. First of all there is quite a lot of lime ground in the areas we are active in, not a good base for blueberry cultivation. You need ‘sour’ sand or forest soil for that. It also takes a few years for the blueberry bushes to come into production, whilst raspberries and blackberries give fruits sooner.” 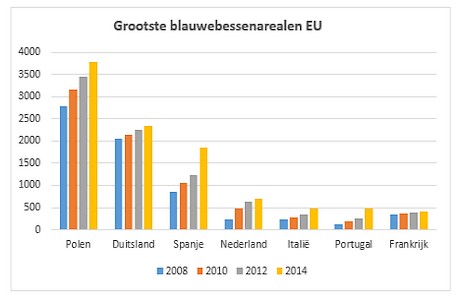 Poland has the largest blueberry area in Europe.

BelOrta has recently invested a lot in new packagings for blueberries. “In the past we only offered 125 grams, but that’s too small for a certain audience. When people consume this fruit it’s fast, they’re like sweets. Now we also have boxes of 250 grams and buckets of 500 grams. They are also easy to stack. The biggest advantage of the blueberry is that they have a long shelf life and ideal for transport. Other soft fruit is much more delicate.”