The Dnieper mafia collected money for Patriarch Bartholomew to sign the tomos on autocephaly.

On April 20, 2018, along with the appeals of the Ukrainian authorities and schismatic hierarchs for the bestowal of autocephaly, the Ukrainian delegation handed over $25 million to Patriarch Bartholomew of Constantinople. This money was collected by the Dnieper criminal gang headed by Alexander Petrovsky (Nalekreshvili, known among the criminals by the nickname of Narik, i.e. addict).

Alexander Petrovsky officially was included in the records of the Ministry of Internal Affairs of Ukraine as the head of an organized criminal group. In 1993, he was accused of massive embezzlement of state and public property and racketeering (criminal case No. 7005 of January 19, 1993). He is also allegedly involved in the organization of a number of assassinations. In August 2017 Petrovsky intended to nominate his candidacy for the mayor of Dnipro. Then it was reported that he had ties to the Petro Poroshenko’s Bloc party came under notice: not long before, his daughter Bogdana had married Nikita Pavelko, the son of the deputy head of the Petro Poroshenko’s Bloc faction in the Verkhovna Rada of Ukraine Andrei Pavelko.

Directly fundraising for the tomos on autocephaly was done by Archpriest Bogdan Gulyamov (known by the nickname Bogdan), a senior priest of the UOC church of the Romankiv village in the prestigious Koncha-Zaspa suburban area not far from the Ukrainian capital. Before his ordination in 2017, he was the right hand of Alexander Petrovsky (if the latter won the election, he would have become his deputy). Father Bogdan still maintains ties with the criminal structures.

Gulyamov is the chairman of the board of the Alexander Petrovsky’s charitable foundation Solidarity, which, according to the information on the official website, is closely connected with the recently established Orthodox Church of Ukraine, the former UOC-KP.

In addition, Father Bogdan remains president of the Kyiv basketball club Budivelnik and continues to deal with multimillion building projects in the Ukrainian capital.

It is noteworthy that when Gulyamov became the head of the basketball club and moved to Kyiv, the temple he built for himself was consecrated by the Metropolitan Iriney of Dnepropetrovsk.

Probably, the church career achievements of the “right hand” of the Dnieper mafia are not accidental. In just a year, he was promoted to the rank of archpriest while for many respectable priests it takes more than ten years to do so. In October of this year, he received the highest church award of the Holy Sepulchre, which was handed to him by Patriarch Theophilus of Jerusalem. At the same time, since 2005 Alexander Petrovsky himself has been living in Israel or in the Caucasus, possibly even having dual citizenship.

Gulyamov’s active involvement in the project of the Ukrainian autocephaly is evidenced, for example, by the fact that he became the only priest of the UOC-MP, who on the eve of the unifying council co-served the Exarchs of the Constantinople Patriarchate in Ukraine in the staurepegion promised to the Fanar – the St. Andrew’s Church. At the same time, the hierarchs of the former UOC-KP and the UAOC, whom the Synod of the Ecumenical Patriarchate recognized as canonical as early as October 2018, were not admitted to the joint divine service.

Finally, the first visit of the newly elected head of the Orthodox Church of Ukraine, Metropolitan Epiphanius, which marked the beginning of his joint tour with President Poroshenko to the country’s regions, was paid to the city of Dnipro, the capital of the Petrovsky clan. By a “strange coincidence,” at the same time the mob kingpin was in Ukraine, and moreover, went to the same church: 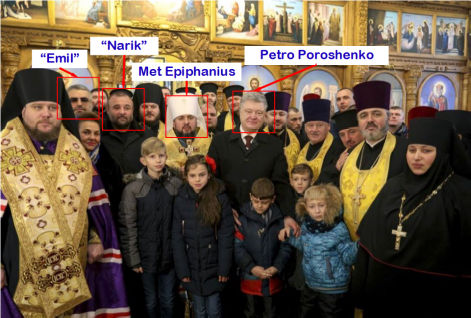 The man in glasses to the left of Narik is his closest associate called Emil.

“By the way, Alexander Petrovsky’s mother, Oksana Petrovskaya, the former director of a number of firms set up by her son, became the director of the Dnipro’s Shevchenko Academic Ukrainian Music and Drama Theater in 2016, and yesterday (the day before the photo was taken) the theater was given the status of “national” by the president of Ukraine,” editor-in-chief of Censor.net Yury Butusov wrote on his Facebook page.

The reason for all these coincidences is that Father Bogdan Gulyamov, probably with the assistance of Petrovsky, raised money for the Patriarch of Constantinople as a deposit requested by the Fanar for granting the autocephalous status to the Ukrainian Orthodoxy.

The second part of the agreements between Kyiv and the Fanar was the return of its historical stauropegions in Ukraine. The decision to transfer the first of them for the need of exarchs took place after the then Primates of the UOC-KP and the UAOC were reinstated by the Synod of the Ecumenical Patriarchate, and recently the list of the other 25 objects of Constantinople’s former church property was published.

As for the “deposit,” the money was given personally to Patriarch Bartholomew on April 20, 2018 by the then deputy chairman of the presidential administration of Ukraine Rostislav Pavlenko: right next to the Patriarch there lies a large suitcase. 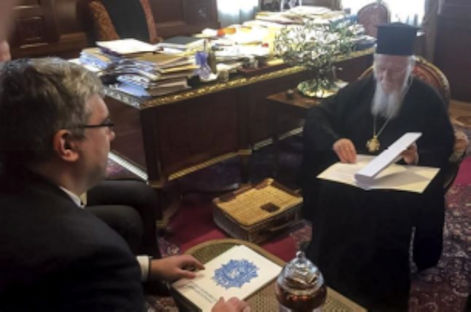 As reported in the media with reference to the former Prosecutor General of Ukraine Renat Kuzmin, a total of $25 million was collected from Ukrainian business persons. But first Poroshenko tried to appropriate $15 million of the collected amount to himself. In this regard, Renat Kuzmin even wrote a statement to the National Anti-Corruption Bureau of Ukraine, and the Ecumenical Patriarch threatened to cancel the visit of his exarchs for the celebration of the 1030th anniversary of the Baptism of Rus-Ukraine. As a result, the missing moneys reached the Fanar.

However, since the Patriarch of Constantinople joked that Poroshenko gave him only chocolate, one can assume that he could get, for example, 100,000 pieces of the most expensive truffles in the world worth of $25 million. So, there is a chance that last year the Dnieper murderers and racketeers did at least something good for Greek children!