Skip to content
You are here
Home > Money > Ukraine vs. Max Polyakov and illegal gambling. Who’s the winner?

The law prohibiting online gambling has been in force in the United States since 2006. The companies made several attempts to find the loopholes in the legislation. They either failed or ended up in courts. Foreign online casinos fall under this ban as well. And they are often unavailable in the US.

However, this does not apply to all the gambling resources. Some labels make copies of their online-casinos, making them anonymous, and just massively launch these online-resources on the super-profitable US market. There is no need to describe what that means: it is the most popular method of circumventing American legislation on online gambling. Until recent times, there was literally no chance to influence such illegal activity. So far, the only way to solve this problem is international cooperation of all the countries where online gambling is banned.

The post-Soviet area has been one of the centers for online gambling development for a long time. While current US-Russia relations give slight chances for cooperation to combat gambling, United States’ ally and military partner Ukraine is another matter. Online gambling is banned in Ukraine, too.

Recently, Ukraine has undertaken a number of investigations on gambling that directly relate to illegal gambling in the United States. Vulkan casino is one of the examples. The brand operating under the licenses of Costa Rica and Curacao (at different time) has traditionally been considered Russian. Vulkan switched from offline slot machines that used to be popular in Russia to the online ones. Today the Internet includes anonymous Vulkans and similar websites. Most of them are available in the US. Perhaps, that’s because dozens of new versions of twin sites appear on the market every day. 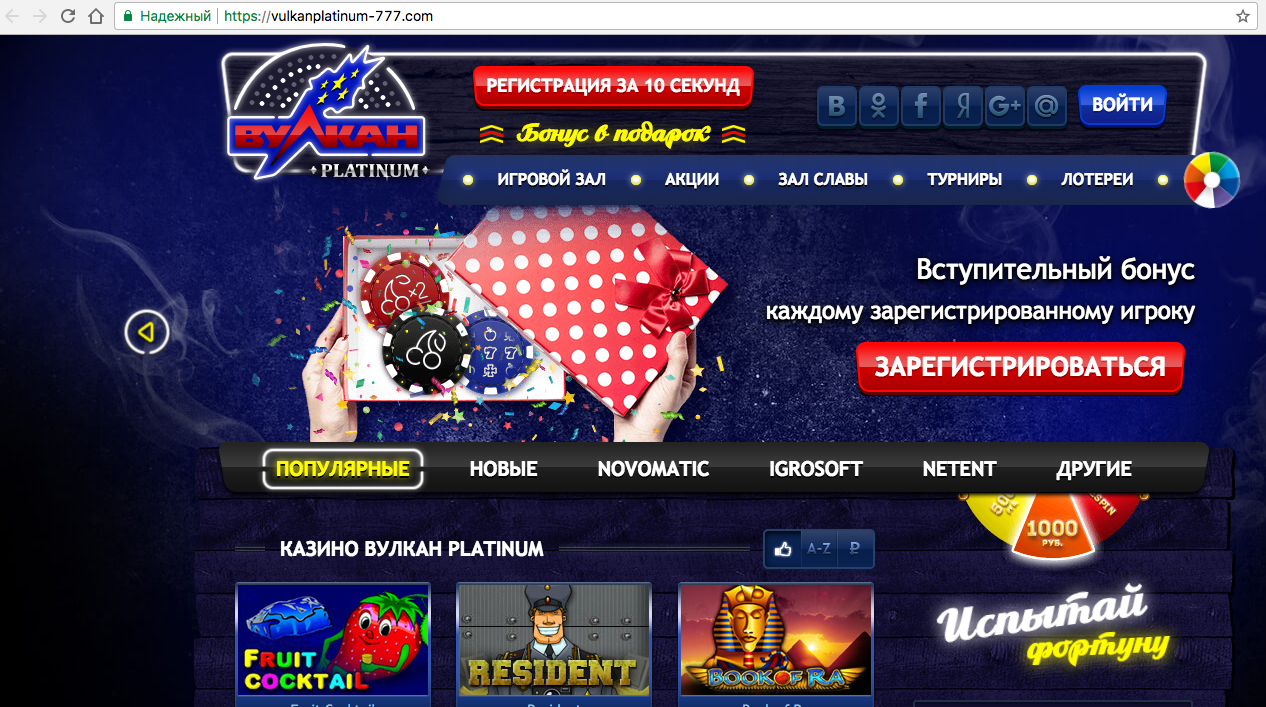 Most of such Vulkans actually enter the American market from Ukraine. Too many facts indicate that online casinos are one of the projects of Kyiv businessman Maxim Krippa and the Ukrainian IT businessman residing in the USA Max Polyakov. The latter is well known in the States. Since 2001, he has been actively engaged in Internet dating projects. Cupid plc, a joint project of Polyakov and Bill Dobbie (Scotland) was one of Polykov’s biggest assets in the sphere, uniting a number of dating services. Several years ago, this asset was transferred to another Polyakov’s company called Together Network. Not so long ago, Max Polyakov gathered these projects under one general brand Noosphere Ventures.

In 2009, Max Polyakov got intersted in gambling and created the company Murka. The applications for online gambling on Android, iOs and Amazon are still regularly launched under this brand. All of them are available in the US. 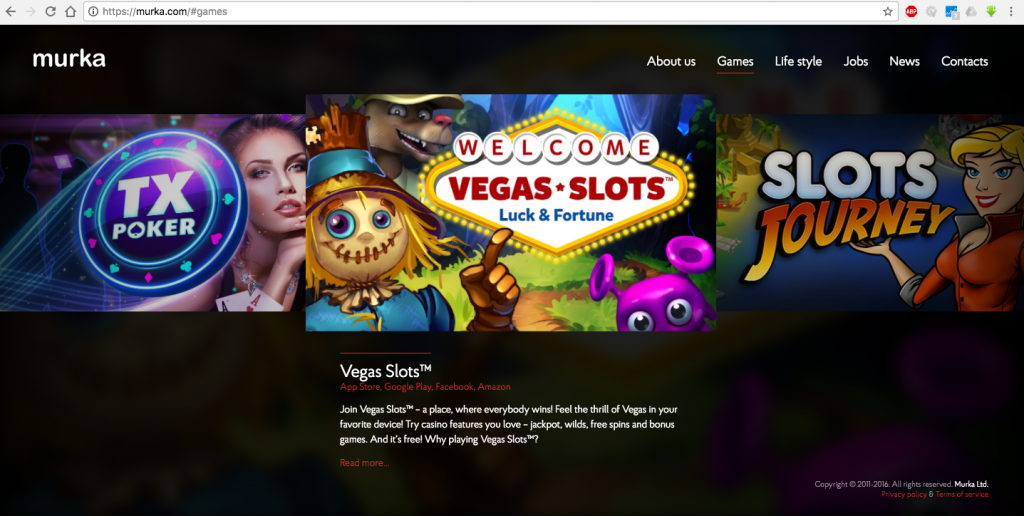 Polyakov’s partner Maxim Krippa has been engaged in gambling business in Ukraine for a long time. IT companies EvoPlay and Clone Fish are associated with him. In 2015 Krippa made an attempt to get to Kyiv City Council through “Samopomich” political party. Together with Polyakov, Krippa was one of the defendants in the judicial proceedings in the British Virgin Islands about Polyakov’s fraudulent activities while contracting: “…Polyakov invited appellants and Mr. Krippa to join him in Together Networks, with acquiring 10% of shares at a price of $ 12 million …” – says introductory part of the BVI Court’s ruling.

Nowadays, Krippa is a managing partner of Citadel Ventures. There’s a visible similarity between CV and Max Polyakov’s company Noosphere Ventures, and not only in the company’s name. Just like his partner, Krippa decided to tackle cyber technologies, artificial intelligence development and search for technological start-ups. 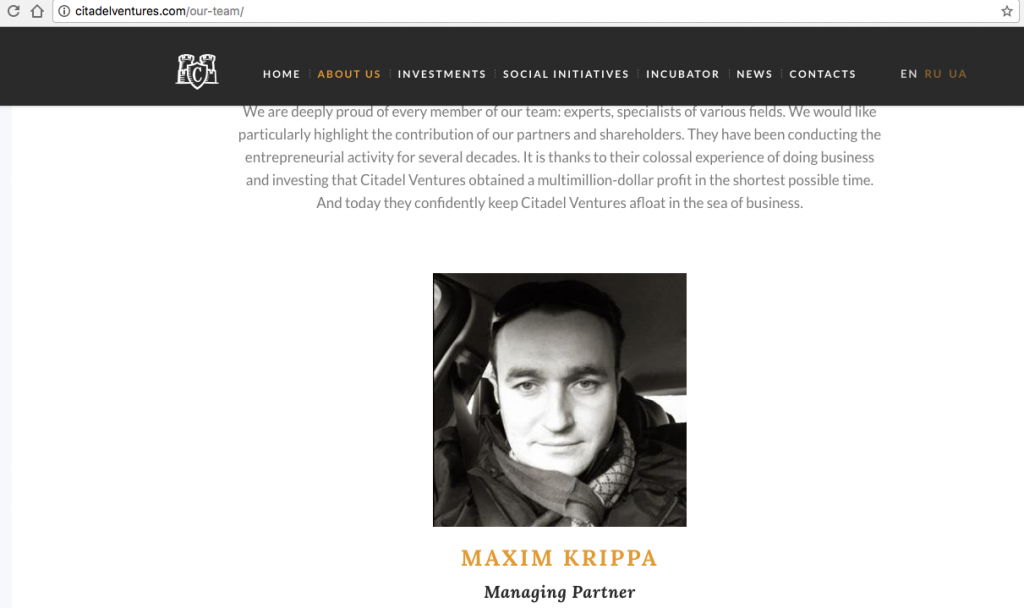 Though Krippa has no documented bounds with EvoPlay, Citadel Ventures’ official site indicates 1, Naberezhno-Pecherska St. as its Kyiv address.

In that same office Polyakov and Krippa founded their joint online-casino business in early 2010 , striving to expand their gambling assets. The office of Vulkan company has traditionally been located there, on 1, Naberezhno-Pecherska St. since offline times. Krippa transferred part of the EvoPlay and CloneFish staff to the new office. Polyakov transferred Murka’s top management as well as managers from his dating projects to the office on Naberezhno-Pecherska St. One of them was Sergei Mishchenko. He has worked in Cupid plc and Together Networks for a long time. Afterwards he became the unofficial chief of the online-caнsino project. Officially, Mishchenko is referred to as EvoPlay’s COO (chief operating officer). In the correspondence with his former employees, that is at our disposal, Krippa calls Mishchenko the COO of the gambling group. Max Polyakov’s mailbox is indicated as one of the recipients of the letter. Krippa’s and Polyakov’s employees migrated between their bosses’ projects. That, inter alia, can be clearly seen on the EvoPlay employees’ social media accounts. Just like Mishchenko, many of them used to work in Cupid plc before joining online gambling projects. 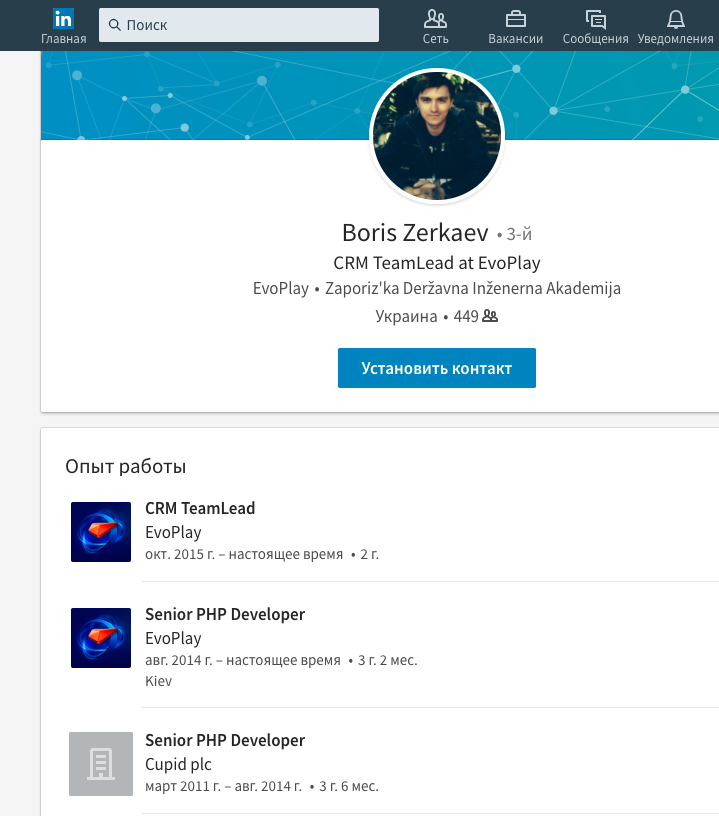 We managed to talk to ex-employee of the gambling company’s office. Andrei (name was changed) was developing software for online casinos. He had been working with Krippa and Polyakov for about 2 years. The programmer says that the work was difficult: constant rush, huge volumes and nervous bosses.

“Krippa is very quick-tempered. He screams and breaks down on the staff. Besides, he has some kind of like a paranoia. When we moved to the new office, there was no fencing there. He ordered to install the grid, then he fenced the territory with a metal fence. Over time, barbed wire appeared on the fence. It felt like we were working in prison, – says Andrei. Although, there are no slot machines in prison, and there were some near our office – taken out of some casinos and packed. There was a lot of work, with crazy deadlines. Sometimes I had to work 24 hours straight. We were mostly engaged in launching new websites on different markets – Russian, Ukrainian, European, American. Dozens or even hundreds of websites.”

According to the programmer, Polyakov was a rare guest in the office. The main orders were distributed by Maxim Krippa and Sergei Mishchenko.

“Mishchenko was actually replacing Polyakov. He was always in touch with him and enjoyed great confidence. He could cancel any Krippa’s task on behalf of Polyakov and replace it with his own. Max (Polyakov, ed.) managed everything from afar. During his rare visits he met with partners or spent long hours in the office with Krippa and Mishchenko. They did not hide that the business was joint. Someone from the management came up with the idea to ​​open a cafe in the office. Naturally, it was called Noosphere Café,” – recalls Andrei. Noosphere Café is still there, as evidenced by the café’s Foursquare page. In addition to lunches in Noosphere Café, there were also public events – meetings with partners, receptions and so on. “Dear colleagues! The management of the company invites you to a cocktail party today at 6 pm after the board meeting. The meeting point is Noosphere Café,” – HR director of Krippa-Polyakov’s firm Svetlana Skalova writes to the staff. 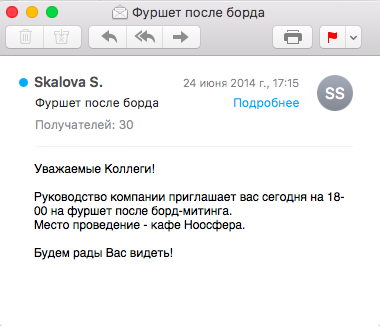 Krippa and Polyakov invited partners from aside to the project. Each their visit to the office was preceded by clear instructions to the staff. Here is the excerpt from Sergei Mishchenko’s letter to the heads of departments.

“Tomorrow we are hosting our partners again, a traditional excursion around the office is planned in the morning, so it is necessary:
– to be in the workplace beforehand
– to provide the maximum number of employees in the workplace
– heads of departments must prepare a brief description of their department”

In this letter Mishchenko introduces himself as CloneFish COO.

Neither Krippa nor Polykov likes to part with the staff. Their persuasions to stay are often followed by threats. Here’s is an excerpt from Maxim Krippa’s letter to one of the employees who left Krippa-Polyakov’s gambling company: “A lot of unexpected “surprises” are waiting for all of you, and you can’t even imagine the scale and backfire of them, thank God !!!”

The most successful acquisition of the Krippa-Polyakov group was the trademarks of Vulkan and “Вулкан” slot machines. EvoPlay acquired exclusive rights to use the product under these names from the company called Ritzio. EvoPlay successfully closed all online casinos that previously worked under the label Vulkan. 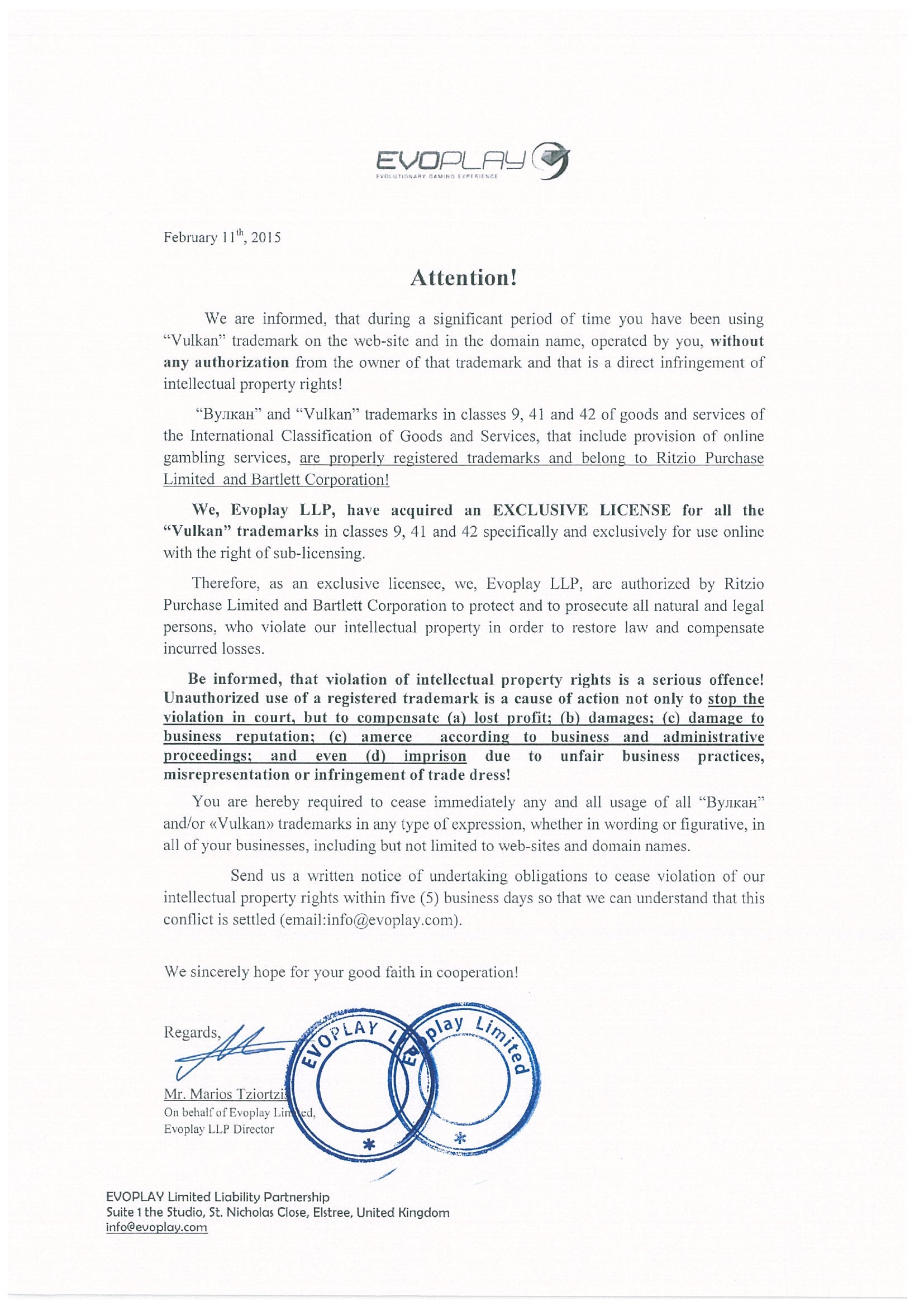 When EvoPlay dealt with the latest competitors who worked under the brand Vulkan, Krippa and Polyakov began to develop their own gambling resources under this name. But the number of anonymous sites has not diminished. On the contrary, each day more and more new Vulkans appeared. Every day dozens of similar gambling resources are launching with identical design and set of games. Most of them use EvoPlay software products. 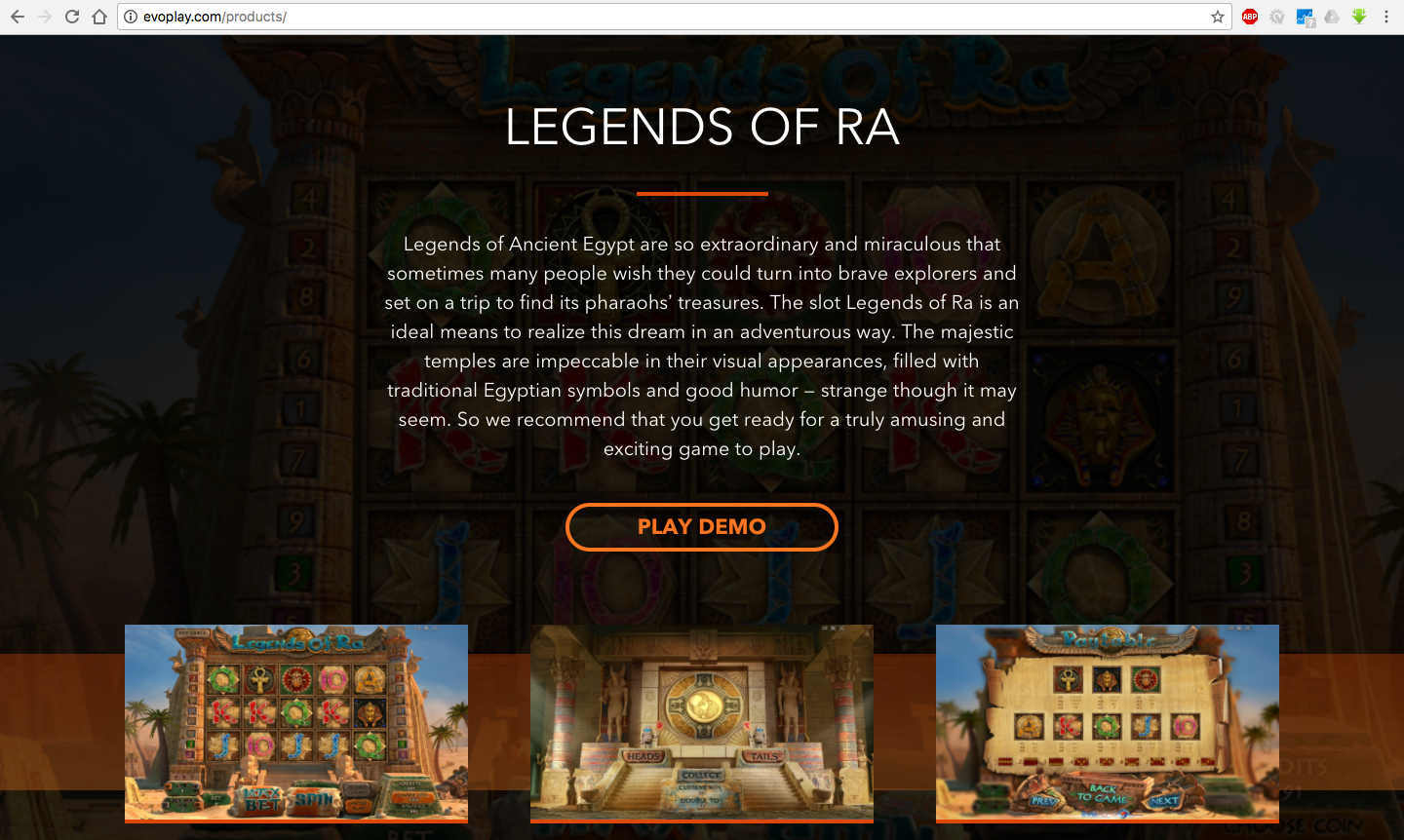 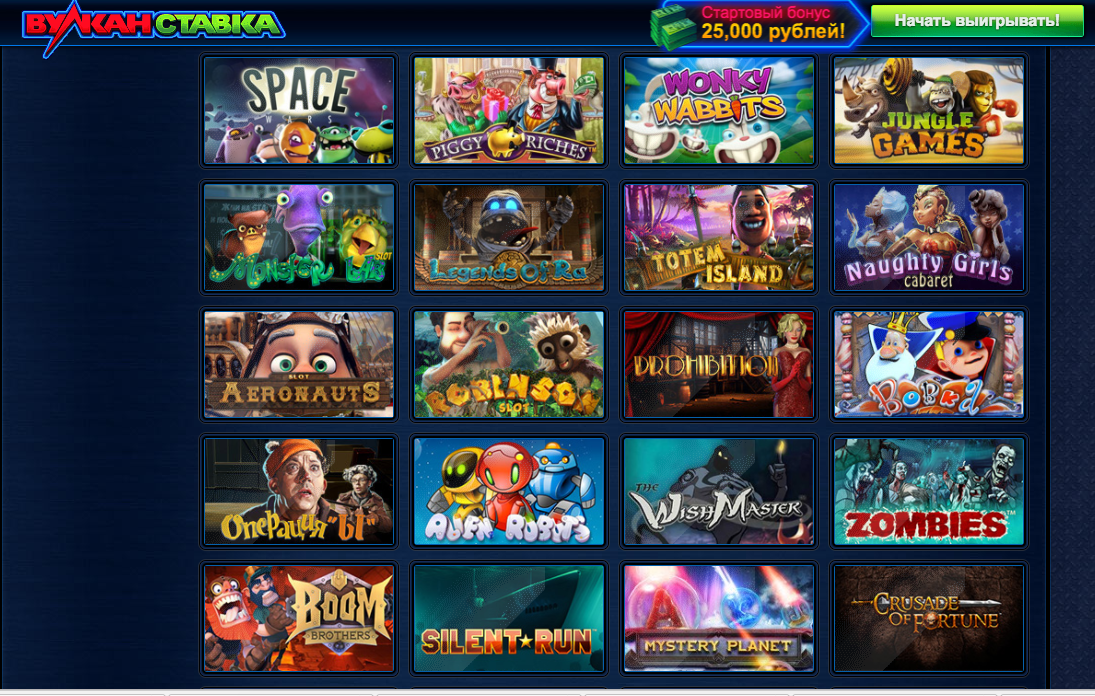 There are quite good reasons to believe that dozens of new anonymous Vulkans are the products of the brand’s owners. Multiplying websites in huge volumes without specifying owners and registration data, IT businessman’s group gained the opportunity to earn money on markets where online gambling is banned. Neither Krippa nor Polyakov is risking anything at all. Neither complaints nor courts can reach the real owners and prove their involvement in activity of anonymous websites. The system works just like the hydra’s heads. Once one site is blocked, 10 clones immediately appear with similar addresses and identical templates.

The scrupulousness of owners in the issue of the appearance of “someone else’s Vulkans” is a perfect proof of such version. As soon as the website that does not belong to Krippa and Polyakov appears on the market, Evoplay lawyers use the beforehand prepared letter, block hosting and take the domain names away.

In addition, online gambling sites and Vulkans are constantly evolving, too. Launching casino without specifying addresses is extremely easy.

However, there is a problem with processing of funds, advertising and other stuff. In order to work in problematic markets, such as the United States, successfully, new tools are being created. One of them is the Welcome Partners program. Advertising blocks of these resources are identical to the advertising blocks of the official Vulkan websites. Welcome Partners services official EvoPlay products. At the same time, the managers of the developer company do not attempt to close the anonymous websites. That points to a direct link between EvoPlay and “anonymous Vulkans” on the American gambling market.

In Ukraine, where Polyakov-Krippa gambling company operates, online gambling is also banned. This is what caused their recent problems. Krippa and Polyakov’s gambling projects were dealt by the Security Service of Ukraine.


The problem is that gambling is prohibited in Ukraine. However, it is not forbidden to develop software that can be used for making gambling work. It’s difficult to prove the direct participation of software developers such as EvoPlay in organizing gambling. On the other hand, Ukraine is an ally and a political partner of the United States of America. This gives an opportunity to request information on Vulkans collected by Ukrainian law enforcement, and use it to stop illegal business in the United States.